Books! Look folks, a post about books that I've been reading. I hadn't realised until I reviewed the last few weeks of my blog how many of my posts about have been all sorts of things book related, but not so much about actual books, much less the ones I've been reading.DB and I have both been under the pump with work commitments.

I have been comfort reading to the max, as I mentioned in a post of that name from earlier this week. As is usually the case, my books of choice for this difficult time have come from my collection of children's literature. While the given nomenclature for much of this genre these days is 'young adult', most of my collection date from a period when children got to be children for far longer than they do these days. Consequently, my collection has a significant lack of the current YA fantasy, very little based on teen relationships, and nothing at all to do with vampires! Mine have in common, for the most part, a flavour of wholesomeness, gentleness and reality. Even the really vintage books have a ring of authenticity for their periods, and the characters are real.

One of my treasured series is Antonia Forest's Marlow books. I've written already about these in a number of posts, including reviews of the two historical books that stand along the contemporary series. You can read those here here and here. Then, as I mentioned at the time, I had to re-read the entire series. I have to say, it's the longest it's ever taken me to work my way through them. There are ten in the main series, and then the two historicals. 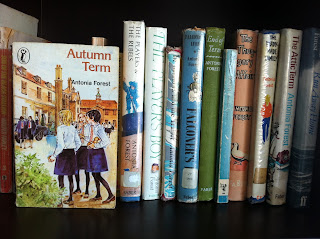 The series begins with Autumn Term. This is my prized Puffin paperback. These were printed in the 80s at the height of The Chalet School series popularity, when Penguin, the parent company, approached Faber, the original publishing house, and purchased the rights to the books that are set in the girl's school. They're a bit fragile, these books, with nowhere near the sturdiness of their Faber Fanfare precedents, let alone the original hardcovers.

We meet thirteen year old twins, Nicola and Lawrie Marlow who, in the company of their older sisters, Karen, Rowan, Ann and Ginty (Virginia), are on the train from London heading for Kingscote school to start their boarding school careers, after many delays and illness had prevented them from starting any earlier. Bored with sitting quietly in their compartment with the others, they get permission to go and stand in the corridor from Karen, also the current Head Girl, who says, "...don't go and fall out of a window. Miss Keith wouldn't be a bit pleased if the train was late because one of the school was careless about a little thing like that." Prophetic words, as it turns out.

The girls meet Talia (known as Tim) Keith in the corridor, also new and with the dubious distinction of being the Headmistress's niece. In the process of getting to know each other, and showing off going to school presents, Lawrie's watch and Nicola's pocket knife, the pocket knife is knocked out of Lawrie's hands and out of the window they've opened as the train rounds a corner while she's passing it to Tim. Without stopping to think twice, Nicola leaps for the emergency stop on the train! In the ensuing confusion, she manages to retrieve the knife from beside the track, but arrives back to the train to find one of the senior school mistresses in full inquisition mode with the furious but mute, hapless Karen bearing the brunt of her anger-borne sarcasm. This, on top of the glorious picture the twins have painted of their prospective conquest of school life in the wake of their illustrious siblings, sets up the premise for the subsequent less than predicted course of events.

Instead of passing the form exams with high enough marks to land in the A form for their year, they end up in III Remove. From there, because everyone in the class is behind for some reason - the twins due to their interrupted early schooling due to illness - they are barred from playing in the junior netball team (where they'd panned to cover themselves in glory) because the powers that be have banned sporting extras. They are just left with Guides, which they don't much want to join because sister, Ann, is a Patrol leader. However, join they do, but run foul of the new Patrol leader with whom they're placed, due to her ongoing feud with their older sister Rowan, who queers their pitch at a court of honour, and they are given the boot. All is redeemed by the end of the book, although not without all sorts of dramas, when Third Remove stage a play for the end of term fund raising bazaar, rather than put up with the stalls assigned to them by the rest of their form.

Under Tim's masterly direction, their form mistress is appeased for lackadaisical preparation and performance in class, the art mistress is pressed into action designing their sets, Lois Sanger - the fifth former who messed up Guides for Nick an Lawrie - is press-ganged into being the narrator when it becomes evident that Tim is hopeless at reading aloud, and they create and perform a madly successful play based on Mark Twain's The Prince and the Pauper - which I had to go and read after my first reading of this book! During the rehearsals, Lawrie's extraordinary talent for acting emerges, and regardless of all the things they fail in the course of the term, so does Nicola's ability for management when, under her stern eye, the form win the tidyness award for their home room.

Autumn Term, like all of Forest's books, is characterised by truly beautiful writing, pithy dialogue that generates moments of sidesplitting laughter, quirky characters that are utterly believable and real, and a created environment that comes to life in the reading. The girls get cross with one another, have bitter fights, and then have to deal with the consequences. These are no cliched, saccharine-sweet English boarding school heroines - they're very real people. The starry-eyed optimism with which the twins have set themselves up to go forth and conquer the Kingscote scene with greater panache and achievement than any Marlow before them is all too real and potentially disastrous. Their sense of crushing inadequacy when, again and again, things go wrong is entirely lacking in melodrama or artifice. The irritation of Tim Keith, who sees entirely the house of cards they've built for themselves, and isn't above pointing it out to them as a foil for deflecting notice from her own completely unsuccessful attempts to capitalise on being the headmistress's niece, is both comical and insightful. The one time she does deliberately use her position - to get permission to do the play - Miss Keith comprehensively wipes the floor with her, making it very clear that Tim has crossed a line she shouldn't ever even think about considering crossing again...

This really is the most delightful book. There is a freshness about it that is like a glass of cold water on a hot thirsty day. It was published in 1948, but reads as if it came out just recently. There is a timelessness about Forest's style which is truly remarkable - and just as well too, since she wrote each book so infrequently, that the last one (which I've not quite reached yet) wasn't published until 1982, but they're seamless in style.

Faber, in response to demand, reissued Autumn Term in paperback, in 2000. It was all very exciting. I bought a copy and waited for the rest thinking it would be great to have the series in duplicate so I could loan them to people. I don't know anyone with these books that allows them to leave the security of their own homes, because they're so rare and so valuable. However, it was not to be... As I've said before, I'll loan this edition of Autumn Term to interested souls for a taste, but if they want to read the rest, they'll have to do it in my house!! 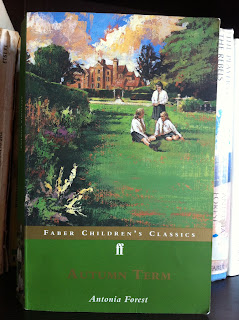