...to make an end is to make a beginning

It was my mother's yahrzeit yesterday - the yearly anniversary of her death. She died suddenly, unexpectedly and without warning nine years ago. One of my most tangible reminders of her that I have are various inhabitants of my bookcases. There are books she gave me over the years - some of which have been mentioned in previous posts - but there is also her poetry collection. 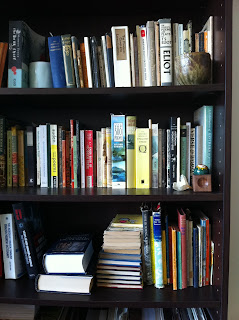 This isn't all of them. There was an entire bookcase devoted exclusively to her poetry books that was in the spare room of her house, which doubled as her study. I remember the day I went to box them up - she'd been very, very clear that I was to have them, in one of the innumerable conversations we had about things she wanted when the time came. As I emptied the bookcase, my father came to watch for a little while. I said to him that I'd need to take the bookcase too if that was OK, because I didn't have room on my own for such a huge influx of books. His comment was that I was as bad as Mum. My reply was that that wasn't the case - she had room on her bookcases for all her books - I didn't! Our recent moves have required that I rationalise the books to fit into smaller spaces, so there are many crates of books in storage, including the rest of Mum's poetry. These ones, peppered with a few of my own volumes, are my desert island collection of her books.

I have a precocious memory. My earliest, clearest memory dates from when I was about ten months old. I know this because my parents moved from that apartment with the room I remember before I turned one. I still remember the shocked expression on my mother's face when I described the scene that I could see clearly in my mind's eye, asking her where it was. The thing is, there are no photographs of that particular room, so the only way I could have described it in such detail was by remembering it. I have a gap of a couple of years before my next memories of place, which are when we moved into the first house my parents bought, when I was three and a half. In my bedroom of that house there was a small bookcase, which I had until just a few years ago - it was sanded and repainted many times, doing duty in my children's bedrooms in turn as they acquired libraries of their own. My first memories of that bookcase - at three and a half - is that it was full of books. They ranged from books that had belonged to my grandmother, old ones of my mother's and new ones that had been bought for me.

Owning pre-loved books is special. New books are lovely - there is a particular pleasure in reading a pristine, new book and finding special passages that speak to us. But old books that have belonged to someone before us have different stories to tell us. They fall open of their own accord to pages that have been read over and over. They have a particular smell - those of you who, like me, frequent second hand and antiquarian bookstores will know exactly what that smell is... They may have inscriptions that mark how their previous owners got them. Owning books that have belonged to our loved ones is special on another level altogether.

My mother had lots of rules about books. No dog-earing the corners - she had huge collections of bookmarks and every time she gave me a book, it was accompanied by a new bookmark. I have lots of them - hers and the ones she gave me - tucked away inside the books on my bookcases, not necessarily marking pages, just safely stashed. She delved in and out of them constantly. She belonged to a poetry group that she'd helped found, where they met weekly to read, discuss and write poetry. I've left all her markers in the books were she left them - marking favourite poems. These are not regular bookmarks, they're anything and everything that came to hand - one of them is the plastic casing for an emery board! Some of them have notes written on them, referencing why she marked them. They remind me, every time I open them, of her journey with particular poets, particular anthologies, and for particular purposes. 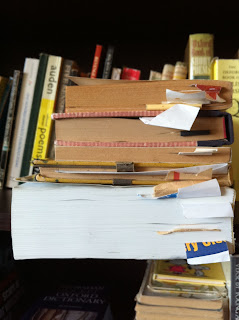 Another of her rules - and the trouble I got into for transgressing this one as a kid...ouchies... - was never, never, NEVER write in a book. To this day, I cringe when I see my students scoring their English texts heavily with highlighter pens, and turning down corners. I can't do it myself - if I need to annotate a book, I start a small spiral-bound notebook with notes, quotes and relevant page numbers that I can refer back to when I need them. I did it all the way through my postgraduate research and had a shelf of notebooks for all the books and articles I read for my thesis research. However, rules were made to be broken, even by my mother! It is in the poetry books, and no others, where I find - only ever in soft pencil, very lightly used - occasional annotations. If you look very carefully on this page, and you will see some of her markings. This was one of her favourite poems, from T.S. Eliot's Four Quartets. It's one of my favourites too, and we read it at Mum's funeral. 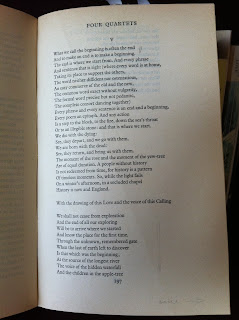 We did a road trip together through Victoria the summer before she died. I think I've mentioned this before in an earlier post. The trip was, ostensibly, to collect a trailer from a family member and take it back to South Australia. We could have just driven there, collected it, and driven home again. Instead, we took a week and roamed the state, stopping when we came across second hand book stores, antique shops or interesting art galleries. We brought back several large boxes of books between us, pieces of beautiful hand made pottery, and a selection of odd curios. The we collected the trailer and headed for Adelaide.

The real treasure of that time was the time itself. Time spent, just the two of us, no timetable, no obligations - just time together. Time to do what we pleased, as it happened, with no expectations, no sense of pressure to get back to other things. It was special, and at that time of both our lives, something that was a little hard to come by without interruption.

Judith Ellen Finch 1934-2003 Zichrono livrachah - may her memory be for a blessing.