The Kraken Wakes is one of John Wyndham's early novels, first published in 1953. In some ways, it is almost a template for many of his other books. There are things that some of the later books have in common - a business-like narrator with an insightful partner, a global perspective on the long-term ramifications of the problem that forms the core of the story, well-drawn believable characters, and a style of story telling that creeps in and insinuates a possibility that what we are reading is, perhaps, not entirely fiction - it could be real...

My copy is, like most of my Wyndhams, an early 60s Penguin paperback with an almost Munch-like illustration on the cover. It's too much like The Scream for John Byrne, the artist, not to have been referencing him. 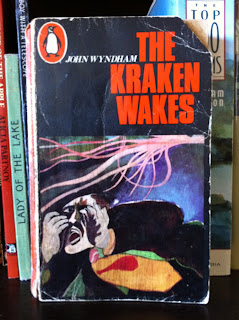 I tend not to re-read this one as often as some of Wyndham's other books. I'm not sure why, because when I do, I find myself captivated. This time around, a number of different things surfaced for me - as is often the case - but some of the parallels and anticipations of things to come, juxtaposed together in the one story, were quite startling and I'm not sure why I never noticed them within that frame of reference before.

This is another of Wyndham's masterful stories of extra-terrestrial invasion, only this time it actually happens. There is alien technology, but there are subtleties that could only be Wyndham's - no flashy firepower or forceful overpowering of the planet. UFOs certainly - which are the first warning, but UFOs that appear in the form of clusters of mysterious red, fuzzy spheres which appear and then vanish beneath the surface of the ocean. A few military types have a go at them with traditional weaponry, both air and sea-borne. Mike and Phyllis, by chance, are witnesses to one of the earliest sightings while on a cruise for their honeymoon. As journalists for the EBC (English Broadcasting Commission), they are able to convince the captain of the ship to share with them his official report as well as getting him to divulge information about other sightings. They file a report that is broadcast back in England, but like others elsewhere, partly due to the fact that beyond the curiosity factor nothing else seems to happen, the story fizzles and dies.

Some time later, scientific reports start to emerge about deep sea silting appearing at unprecedented shallow depths. Another curiosity, which fails to gain much momentum. Then ships mysteriously start to go down, eventually halting all but coastal seafaring. However, it isn't until the first attacks on people that any notice begins to be paid, and even then, the locations are remote, and it remains a tragic, but smallish story. Enter Alistair Bocker, scientist of some notoriety and rapidly gaining a reputation as a sensationalist and crank, as he comes forward with wildly extreme explanatory theories and predictions. He sponsors a trip to the location where he predicts the next attack will be, taking with him a press corps, including Mike and Phyllis. They get their story; Bocker was right in his location, but wholly unprepared for the risks involved, and four of their team are lost, along with a large percentage of the local population. Arising from the sea in the depths of the night, huge 'sea tanks', featureless metal vehicles, make their way into the square of the seaside town and explode sticky tentacle-like filaments which take hold of their powerless victims, pulling them in back into the ocean. Phyllis is only saved when one of the filaments snakes through the window of their room but Mike manages to hold on long enough for her skin to tear away, freeing her.

In due course, these attacks increase around the world and the authorities begin to find ways to defend themselves. New technology in depth charges also allows for bombing in the deeps, where it is known the invaders lurk, and for a while things calm down. Until the sea levels start to rise. And rise... Again, Bocker leads the way, predicting that this is the beginning of the end game. Again, he is dismissed. Once again, he is right - sea temperatures are warmed in the Arctic and Antarctic and the great glaciers start to calve, currents driving the icebergs towards the equator, melting and bringing more and more water advancing on the land. Inevitably, as the waters rise, communities that are already in crisis in the wake of the ceasing of sea freight due to the dangers to shipping begin to break down into anarchy. The English government, relocated to higher ground in Yorkshire goes silent suddenly as their enclave is over taken by those on the outside who believe they are holding out. At this point, Mike and Phyllis decide the time has come to leave the EBC stronghold in London and risk the perilous journey to their cottage on high ground in Cornwall - which, as Mike discovers on arrival, Phyllis has secretly fortified and equipped with supplies to last a long time.

Structurally, the book introduces us to the story in hindsight with a brief preface where the narrator, Mike Watson, discusses their present isolated, post-disaster situation with his wife Phyllis, and says that he'll write about what happened. That, while there will be numerous official documentations and histories of events created, as someone who was there from the beginning, he has a particular take on it and that a more personal account will have a different value than the 'official' versions.  It then moves straight into a chronological narrative that is broken into three phases. Each has its own flavour, but all are marked by tones of increasing desperation as it becomes obvious that the human population is engaged in mortal combat with an enemy that they can't physically identify, can't engage with directly, and can't take on on any level playing field.

In the very beginning of Phase One, while Mike is still setting the scene, there are a couple of paragraphs that I have read so many times in my multiple readings of this book, but this time they really grabbed my attention.


It began so unrecognizably. Had it been more obvious - and yet it is difficult to see what could have been done effectively even if we had recognized the danger. Recognition and prevention don't necessarily go hand in hand. We recognized the potential dangers of atomic fission quickly enough - yet we could do little about them.

If we had attacked immediately - well, perhaps. But until the danger was well established we had no means of knowing that we should attack - and then it was too late.

I worked for a year on contract at the Sydney Jewish Museum as a Holocaust educator. During that time I researched and wrote three education kits to compliment the courses we ran for schools at the Museum. One of them was the rise of Nazism in Germany from 1933 to 1939. Part of the kit included an article by the resident historian at the Museum, Konrad Kwiet. It had started life as the chapter of a book, and was written originally in high academic German. I was working from an equally academic English translation which I had to edit down from the original 5,000 words to 3,000 to fit into the kit. It dealt with the incremental changes to racial laws from their inception as they were implemented to segregate Germany's Jews from the Aryan population. Many people have asked, in the wake of the Holocaust, why the Jews walked passively to their deaths in such huge numbers. Of course, not all of them did. Many fought in partisan groups, resistance movements and in the camps, and many eluded the dragnet of deportations, hidden by people who risked their own lives to do so. However, one aspect of the article that has haunted me since was how something can creep up on us incrementally. Konrad documented so many responses from the leaders of the Jewish community in response to each new level of restrictions - while some took the implicit warnings seriously and got out while they could, many more said to themselves each time, "if this is all that's going to happen, we can deal with this..." Until, it was too late.

This is an all too human tendency. We are, most of us, innately optimistic. We try hard to put a good face on things even in the worst of circumstances. If you consider that this was published less than ten years after the end of World War II, Wyndham's war experiences must have been still very fresh in his mind, and he and the rest of the world would still have been struggling to come to terms with the horrors of the eleven million dead at the hands of Hitler's campaign of hate - six million Jews and five million others.

The other, more contemporary connection that emerged for me was the parallel between the eco-war waged by the invaders in Wyndham's book and what we are watching happen to the planet now as a result of our own industrial excesses coupled with the evolution of planetary change. In this case, there's a spooky visionary-ness on Wyndham's part, which is by no means unique to this book. The Maldives are disappearing - these tiny islands have been an off-beat tourist destination for a long time. White, white sand, crystal clear ocean, a pristine environment and a fascinating local population attract people year round. However, rising sea levels are a real threat to this tiny nation, and already, calls are going out to other countries for refuge when, eventually they go under. The high ground will become prized, as it did in the novel. The struggle for survival in the face of the encroaching waters, when whole societies imploded, turning on each other, can be seen as a warning for us now. What do we need to do to plan for a future where the world, already over-populated and with dwindling resources, could be very different?

At the end of the book, Mike and Phyllis are recalled to London as rebuilding begins once the water level stabilises. The world population is some fifth to an eighth smaller than it was, but ultrasound technology has helped defeat the invaders. Phyllis has the last word,


I was just thinking... Nothing is ever really new, is it, Mike? Once upon a time there was a great plain covered with forests and full of wild animals. I expect our ancestors hunted there. Then one day the water came and drowned it all - and there was the North Sea... I think we've been here before, Mike... And we got through last time...