I found it - the middle Joanne Harris book - recently re-issued under a different title (which apparently it always had...), The Lollipop Shoes. So, now I have all three and they're sitting waiting to be read. Many thanks to the patient people at Better Read than Dead - great name for a bookshop - in Newtown, where we prowled bookshops late in the day yesterday. While I was there - and with Dearly Beloved too - I also picked up Catch 22, which I've never read. There was a whole pile of re-released classics in nice Vintage paperbacks that weren't expensive, so I thought, what the hell - when I'm in good enough shape to read something that's not nice, I'll have a go!

We also had a wander through Elizabeth's - a few doors down - the secondhand bookshop I mentioned a few posts back. I was hunting that elusive Wyndham anthology, The Seeds of Time - which the guy there actually knew of, but sadly, didn't have in stock. I tracked down a copy on Amazon - a collectible... For $250... Which I don't think I'll be acquiring in the near future. However, I found another Joanne Harris - Five Quarters of the Orange - Minyan, by Alan David Gold, and a gem of an art book about Manet, Morisot, Degas and Cassatt - it's so very rare to find art history books that weight women in any one period equally with their male counterparts, so I just had to grab it. In true book junkie style, I am corrupting Dearly Beloved, and he came away with two books for himself as well. All in all, a good haul.

Meantime, this is by way of one of those extra-curricular posts and there is work waiting to be done. So I will leave you with another of my good friend's Facebook pics - I just lack the cat for this to be a real picture of the status quo here... 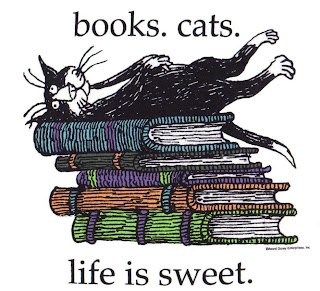