I bought this book for myself at a wonderful bookstore in Adelaide - The Murphy Sisters. It was a feminist bookstore, and had the most wonderfully diverse selection of books - children's, adult fiction, all the usual suspects in non-fiction categories, and it was just a lovely place to go. It had the added attraction of being at the end of my street (I suspect my then husband was not so impressed with its proximity!). It's moved from there and is in another suburb now and it's years since I've been there. I can wander my bookshelves today and pick out books that came from there that are still part of the permanent collection.

I came across this little treasure and just had to buy it. Twenty-eight was a tiny baby at the time, so I didn't really get away with justifying it as a purchase for him. But it's so delightful, and I had to have it. I have quite a substantial collection of picture books now, all purchased for the illustrations. Thinking about it this morning, this is probably the book that started it.

The Book Mice is the story of a book, and the mice that live in it. The first reads:


Until a moment ago, it was as dark as night inside this book ... dark and very, very quiet. But when you opened the cover and turned to this page, light and sound just poured in. Now you have woken up a Mouse from a long, deep sleep.

"There's never any peace and quiet around here," he grumbles. "I might as well get up."

And then when you turn the page there he is, travelling across pages two and three, playing with the words, because he's bored. While he's on page five, he hears a noise, so he bends down the top of the page, and there on pages six and seven is another mouse, Kipps, singing a song about socks, strumming along on a stretched rubber band. He calls the first mouse Sock, they make friends and start on an adventure to explore the rest of the book. Venturing outside the book at one point, they discover a bottle of ink and have a marvelous time playing with that, until they tip it over and spill it everywhere. Then Sock, wandering on ahead, spots his inky footprints behind him and becomes convinced a monster is following him, especially when a great black blob starts spreading up the pages below him. When Kipps appears, he's quite off-hand, explaining that it's just the spilled ink spreading through paper. They finish up hopping over to the last page, with Kipps singing a new song about how nice it is to be two of them and friends.

The concept of the book got me first, and then I was captivated by Stephen Forster's exquisite pencil drawings. It's not often that you see a picture book illustrated entirely in black and white, and his mice are delightfully rendered in pencil.

It's a hardcover, published by Evans Brothers, London in 1980, measuring 15cm x 15cm. I've never seen another copy of it. 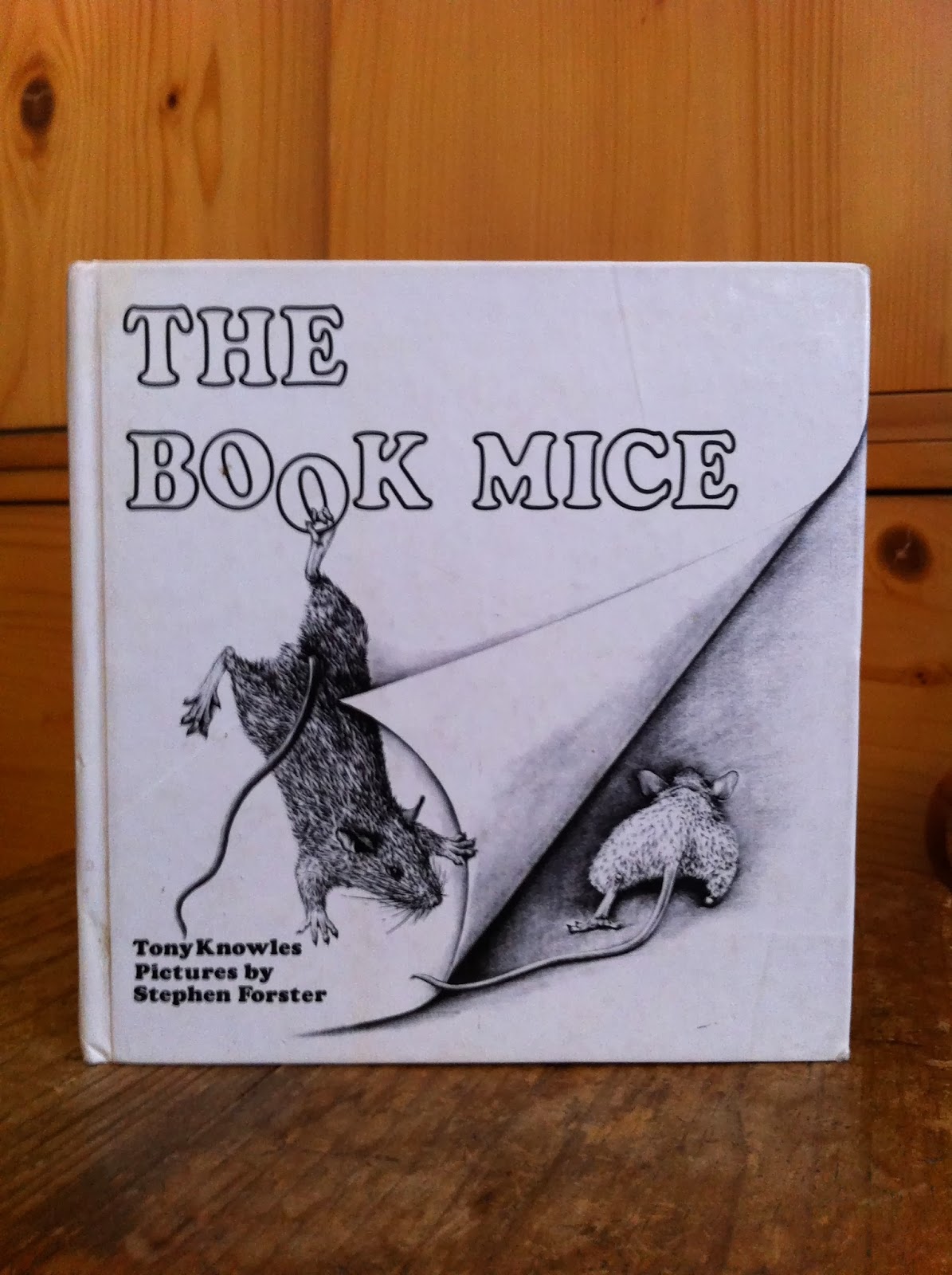 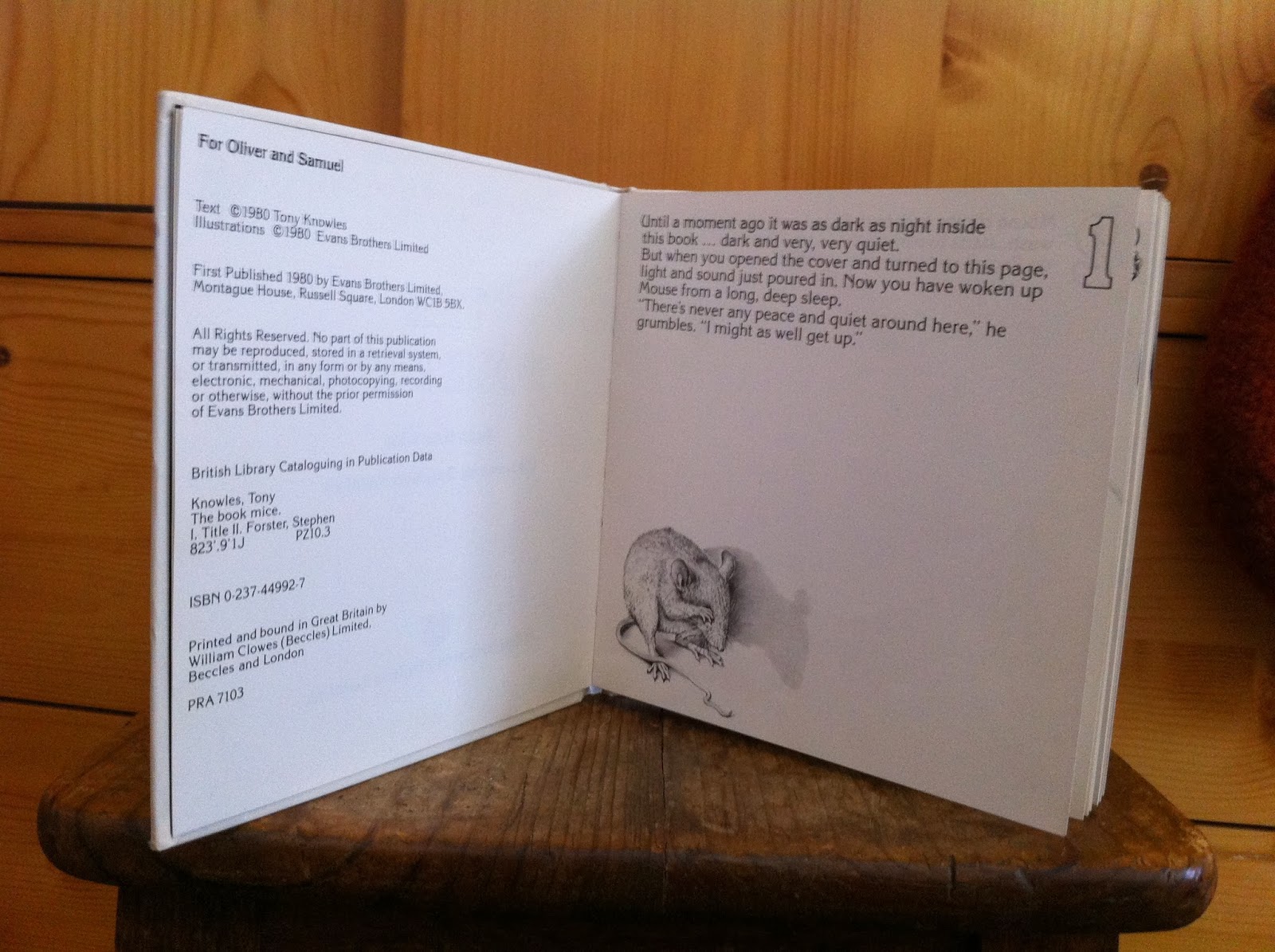 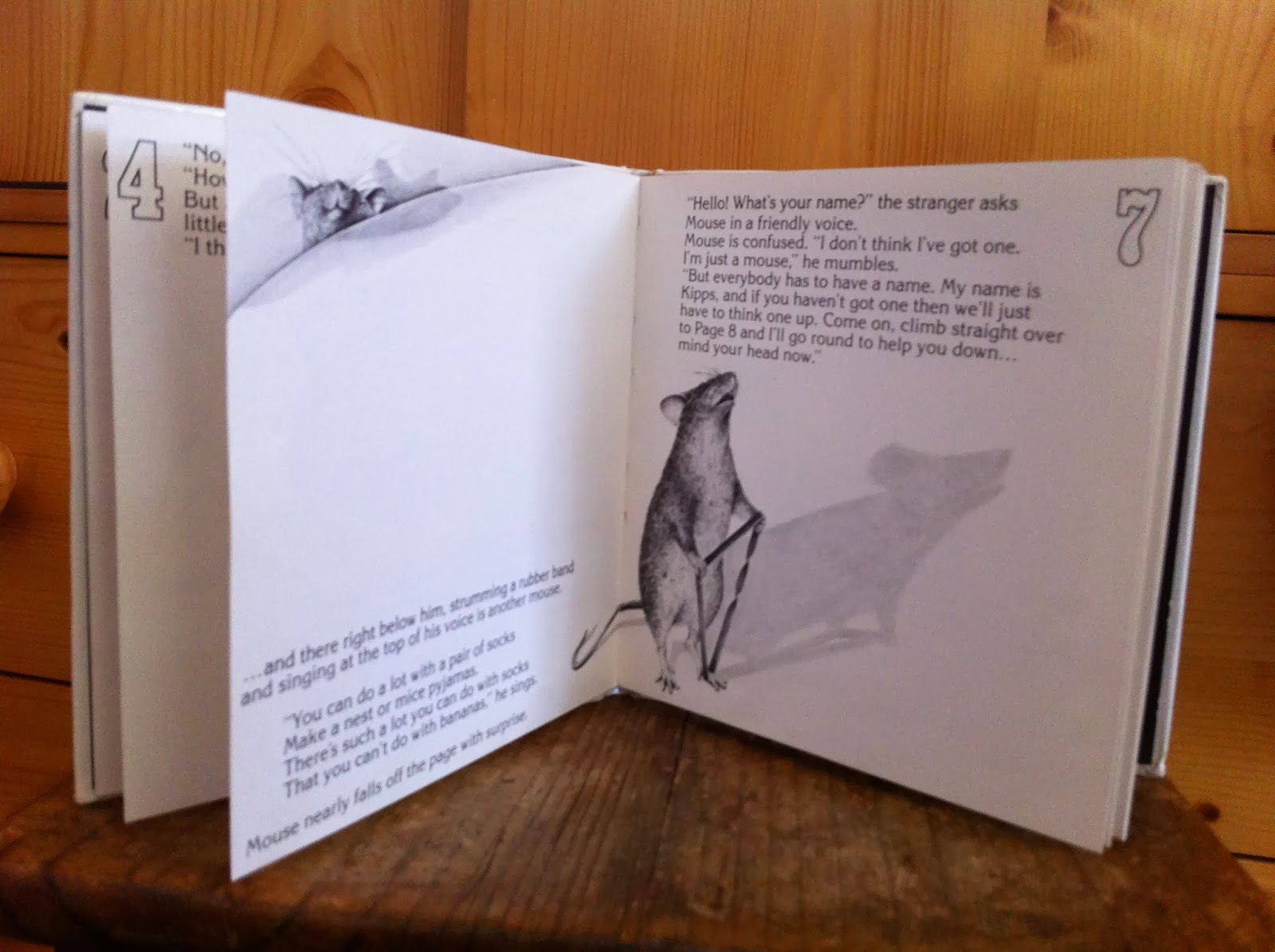 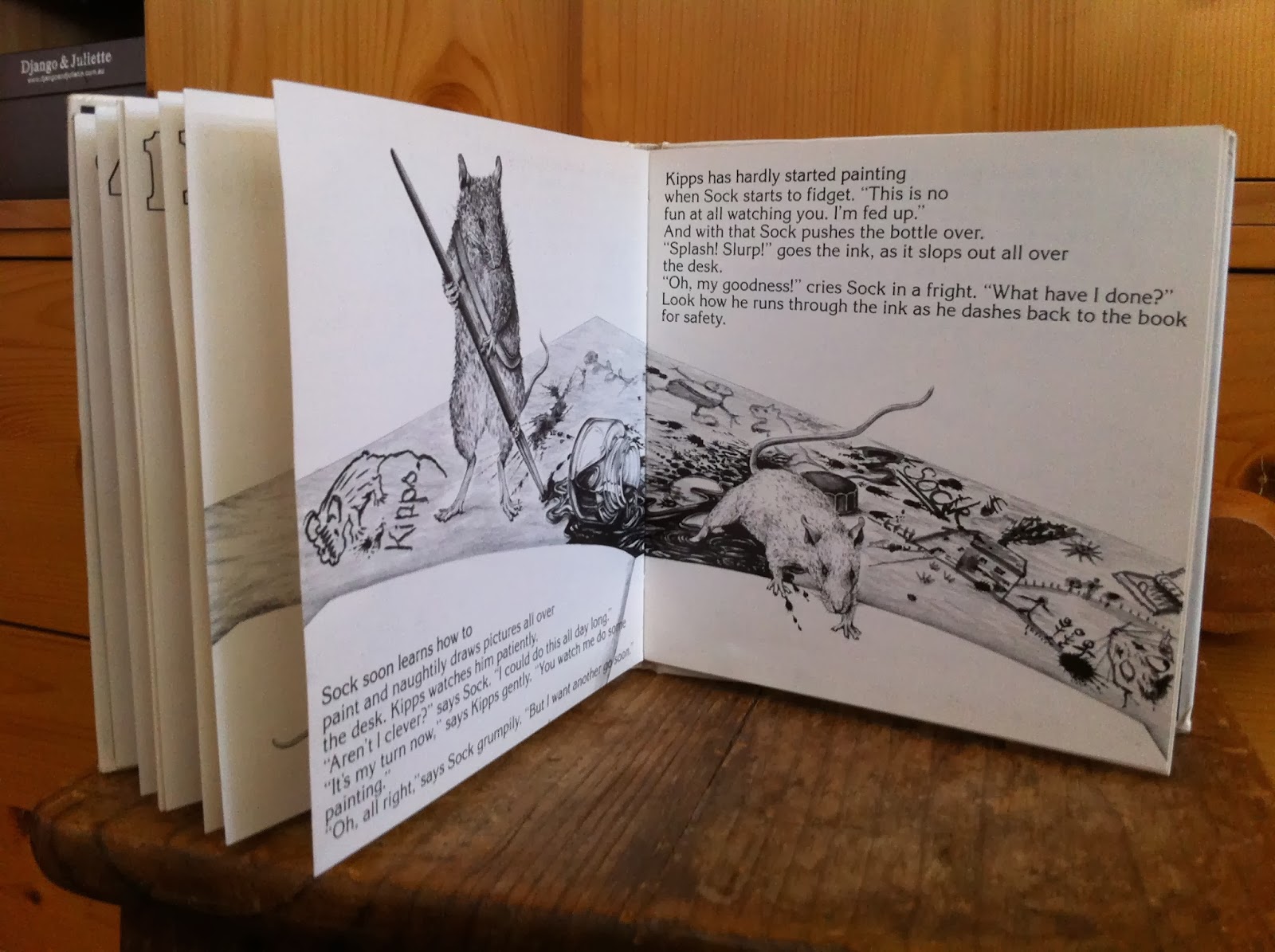 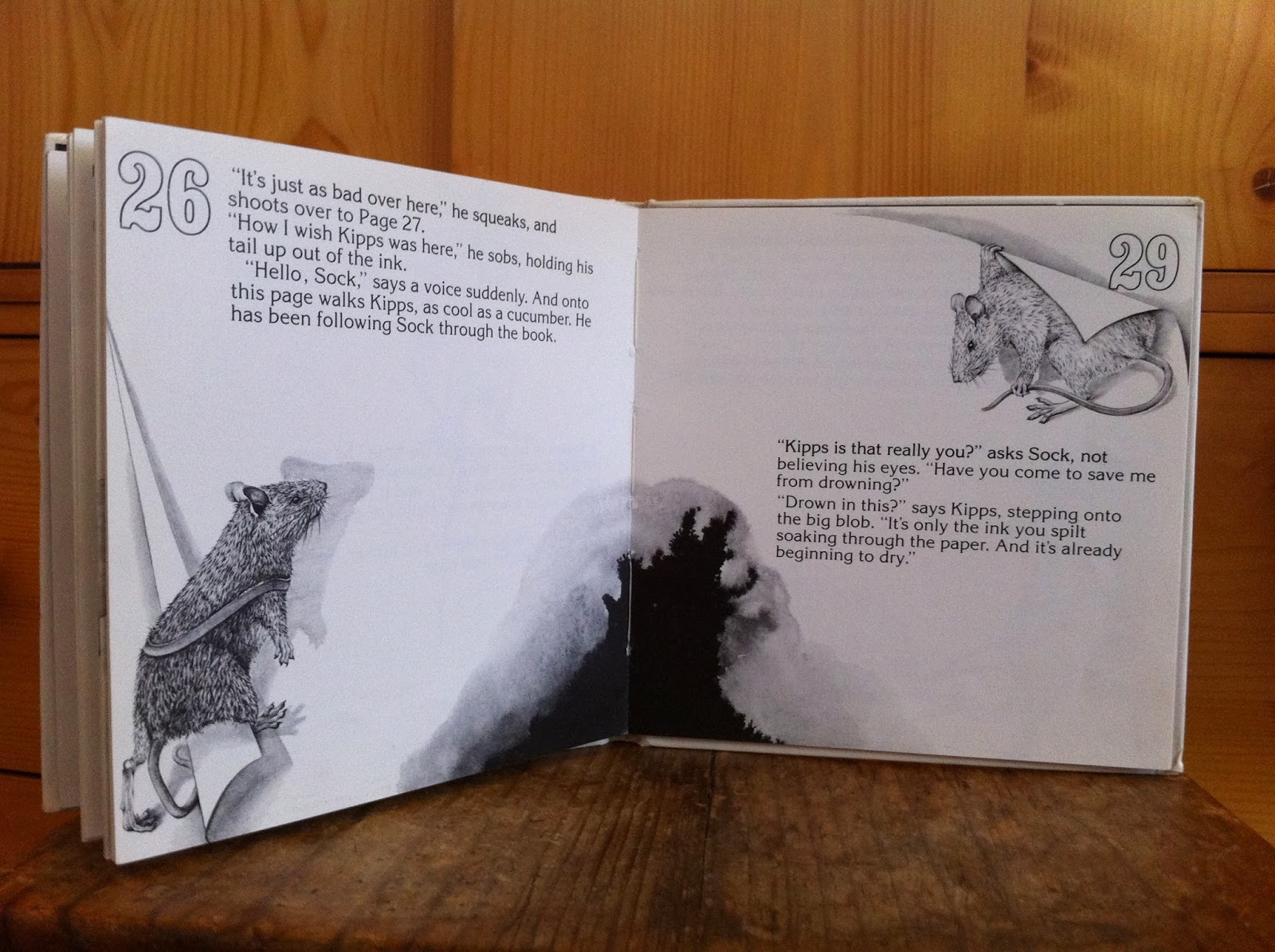