A little spot of comfort reading to get me through this difficult week. This was my bedtime book, the days being given over to monumental amounts of work that left my brain in no condition for any kind of reading that required effort. It comes from one of a couple of tried and tested go to comfort zones on my bookcases, all of which are on the two bookcases holding my children's literature collection!

Noel Streatfield also wrote for adults, but I've never managed to come across any of those, and certainly her fame was as a children's author. She was a precocious, talented and opinionated child in a family of vicarage children and all her children's books relate to families of children facing various challenges, artistic, financial and/or relational. She has particular insights into children's behaviour and one of the things I've always enjoyed about her child characters is that they're not perfect. 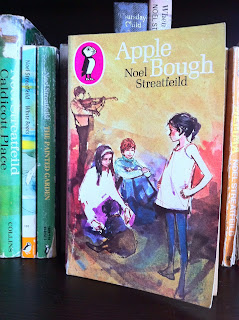 There are four children in Apple Bough. Myra, Sebastian, Wolfgang and Ethel, or Ettie, as she is known - all named for famous people admired by their parents. Their parents, David and Polly, are a pianist and artist respectively, both of them passionate about music, art, their children, their children's talents, and their family unit. They are also incredibly vague and unworldly. Until Miss Popple, who becomes known as Popps, joins the family as their governess, the household is chaotic and disorganised, the children's clothes are outgrown and threadbare, and they are the talk of the village. From the beginning, Popps sees two things: one, that the family need her to be more than just a governess, they need a housekeeper and with the children's help, she takes over the household management in addition to their lessons, and two, there needs to be one sensible person to manage things when she's not there, and that has to be Myra, who is the eldest, the one with no particular artistic talent, and the most inherently domestically minded. Sebastian is learning violin and has the early marks of being a prodigy. Wolfy is also musical, with secret dreams of writing award winning pop songs, but is officially learning piano, and has a prodigious memory for reciting and a general air of self importance. Ettie is the dancer of the family, and at an early age is already showing great promise.

Then comes an opportunity for Sebastian to play in a small concert with his father accompanying. He is heard by critics and impresarios, and suddenly a career is being mapped out for him that means the family must leave England, as children under twelve can't be granted a license to perform professionally. Their house, beloved Apple Bough, is sold, and the furniture put into storage. Popps is prevailed upon to leave the cottage she shares with her bother, the village vet, and accompany them as they commence global tours, and being 'citizens of the world', as Polly declares - which is, to her way of thinking, the best way to live, rather than split up the family.

Four years later, Sebastian's fame has grown and the other three children have become decidedly jaded. Once city is the same as any other. One hotel is the same as the next. Even the places they spend Sebastian's 'rest periods' have ceased to be interesting. They are all very aware that Sebastian finds balance in their being there to extricate him from fans after concerts, and play all the usual family games to help bring him down from performance highs. But, they feel as if they've just become appendages. They also feel that there's nothing to be said about it, as Polly will never consider splitting up the family. Consequently, they feel very stuck. Both Wolfy and Ettie want settled places where they can get the training they both want and need, and Myra wants, more than anything else, a settled home - and in her dreams, that means going back to Apple Bough. Popps is aware of their unhappiness, but like them, can't see a solution.

Finally, Sebastian turns twelve, and they return to England for his debut there. He is already very famous and his success is assured. Before his first concert, the family go to spend a holiday with David's parents in Devonshire, a clergyman and his wife. It's four years since they've seen each other and the grandparents aren't completely pleased with what they see, especially after Grandfather has taken each of them aside for a one on one conversation, particularly the one with Myra where she confides in her yearning for a settled home. Agreeing with her that it's time, he tells her that if she wants something badly enough, she will find a way to make it happen. On the train back to London to join their parents who have gone ahead to prepare the house they've rented for their London stay (until Christmas time, when Sebastian is then due back in America), they meet a young man in their compartment with whom they share their lunch. Joining them in their general fun, which includes Wolfy reciting, he reveals that he is a film producer and would like to audition Wolfy for a part in a film he's currently casting. Despite being enchanted by the prospect, Wolfy says it won't be possible because they'll all be leaving the country before filming would be finished. Myra realises that this is a possible opportunity to begin 'Operation House.' She says if Wolfy wants to try for the film, he should and something can be worked out. Next is the letter from Ettie's Paris-based ballet teacher with an introduction to the legendary Madame Fidolia in London (readers of Ballet Shoes will recognise this name). Myra insists that Popps takes Ettie to audition, and Ettie gains a place in Madame's school where she can receive training to prepare her for an audition at the Royal Ballet School when she's a little older.

The parents find this all organised and are horrified. With Wolfy needed at the studio with an approved governess, and Ettie due at school on the other side of London, how are they going to manage? And what about America? Enter Paul, the new tutor for Sebastian. An enterprising young man not long graduated from university who brings not only teaching skills to the family, but a much needed support for Popps and another confidant for all the children, who can be relied upon to inject some much needed fun and ingenuity into managing the comings and goings in the household, and, it turns out, Myra's Operation Home campaign. Also on side are Polly's parents, Mumsmum and Mumsdad, who don't think the family's peripatetic lifestyle can continue any longer without the other children suffering enormously.

Wolfy's film does go on past Christmas, and Ettie refuses to be removed from Madame Fidolia's care, so David and Polly are forced, with Mumsmum and Mumsdad backing Myra and the others, to head to America with Sebastian and Paul. Those left behind settle into their new routine, and Wolfy's film is followed by a television series. Ettie auditions and gains a place in the Royal Ballet School, while Myra begins to feel that somehow, there's nothing left for her, and while she's achieved stability, the London house doesn't feel like the home she craves, and that having a 'talent' for being a good sister, as Grandfather told her, is possibly not enough.

Catastrophe strikes when Sebastian is struck down by appendicitis and is rushed back to London, followed by his American agent. A long convalescence in Devonshire with the grandparents that means cancelling his next Russian tour is planned but instead of being pleased about the rest, Sebastian has a crisis and on the next day the newspapers carry the story that he is dangerously ill. Unbeknown to anyone except Myra, Mr Ruttenstein, Sebastian's manager, has long promised him his Amati violin if he performs at all the engagements that are arranged. Sebastian mistakenly believes that having to cancel the concert tour means he'll no longer get the violin, which triggers his fever. Myra, braving Mr Ruttenstein in his London hotel room with Paul's help, discovers this is not the case. Mr Ruttenstein has just been waiting for Sebastian, small for his age, to grow big enough for a full-sized fiddle, and he has the Amati with him to hand over. Paul delivers the violin to Sebastian, getting past all the medical staff on guard, and Sebastian starts to recover. Sebastian also finds out a few things from Mr Ruttenstein that Myra, in her rage about how she believes Sebastian has been treated, divulged about their lives and how the rest of them have felt for such a long time.

Suddenly, just like the time in Apple Bough when David and Polly held many secret discussions behind closed doors after the offers first came for Sebastian, the house is full of secrets. Sebastian is still in hospital and none of the other children know what is going on. They are just told that all will be revealed when Sebastian comes out of hospital and his convalescence in the country starts. To make things more manageable in the house, Myra suggests that Etti and Wolfy, both finished their terms and filming and rambunctious, be sent early with Paul, so they are packed off to Devonshire. Then Popps departs to visit her brother. Then, most unexpectedly, David and Polly head off leaving Myra behind. She endures a long day waiting for Sebastian to be released from hospital for the drive to the country, inexplicably late in the day and then, worn out by all the tension, falls asleep in the car. Arriving, Sebastian tells her to get out first, and she realises they're not in Devonshire at all - they're at Apple Bough! After Mr Ruttenstein heard her story, he went to Apple Bough and persuaded the new owners to sell it back to the family, and Sebastian has bought the house for her, because she is the one who most wants a home, while the rest of them will be more than happy to come home between things, but are destined to perform and travel the world.

As is the case with all of Streafield's books, this is just delightful, feel-good reading. It's not saccharine though...there are lost tempers, tantrums, unhappiness and difficulties to be dealt with, and adults being justifiably cross with children whose egos get the better of them. Thoroughly recommended, if you can track copies down. Some of Streatfield's books have never gone out of print - Ballet Shoes being one - but I'm not sure about this one. My copy is a vintage Puffin, published in 1981 with the cover and inside illustrations by the legendary Margery Gill, who I must - note to self - find out about and do a separate post about, because I have a quite sizable collection of books with her illustrations and they're marvelous!

So, go hunt down this book, and other Streatfields, particularly if you have children to read to, because this is the kind of quality kid's lit that is sadly scarce these days.

P.S. In response to a number of comments, and conversations outside this post: