Thanks to eBay, I managed to get my hands on a delightful children's book that I've been hunting for donkey's ages. I first read Dianna Wynne Jones' The Ogre Downstairs on loan from a friend, and found it quite enchanting. On and off, ever since, I've kept an eye out for it in second hand book shops, but Wynne Jones' books don't seem to surface very often. Clearly, I need to go check out eBay more often as this is the second hard to find book I've managed to get very easily for a very good price! 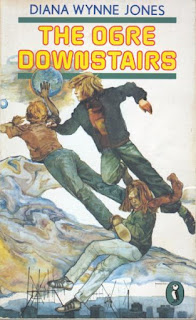 The story opens with brothers Caspar and Johnny arriving home from school, Johnny with a mysterious parcel from his stepfather. He's not too pleased about it, saying that it's a bribe. The household is far from comfortable, their mother having not long married the man befriended by their little sister, Gwinny, one day when she was lost. After the marriage, they go to live in their stepfather's house, which is now very crowded as his sons, Douglas and Malcolm,  have to leave boarding school due to the costs of a family of seven.

All of the children struggle to adjust. Caspar, Johnny and Gwinny thought they were all managing very well living with their mother, Sally. They don't like their stepfather, whom they name 'The Ogre', and they don't like their stepbrothers, finding them distant, posh and hard to get along with. Douglas and Malcolm, have to adjust to being pulled out of boarding school and being sent to the local school with Caspar and Johnny. The Ogre himself, unused to having children around, finds the hurly burly of five children infuriating and is in a bad temper most of the time - seemingly always looking to find fault and mete out punishments. Sally - Caspar, Johnny and Gwinny's mother - seems always to look hurt and tired most of the time, which just makes them feel even more animosity towards both The Ogre and his sons.

Much to Caspar's disgust, it turns out that Johnny isn't the only one to receive a present from The Ogre - Malcolm has one too. When they open their parcels, they discover they have both been given large chemistry sets. And so the fun begins... Initially, both boys, as small boys do with chemistry sets, set out to create the worst possible stinks, and the upstairs of the house soon becomes quite unpleasant. Then, in a kerfuffle between all the boys in the disorganised mess of Caspar and Johnny's rooms, one test tube is broken and Gwinny's leg is splashed with the concoction Johnny was mixing. No one notices initially as Caspar and Johnny are occupied pushing Douglas and Malcolm out of the room. Having done that, they turn around to find Gwinny floating up against the ceiling. The bottom deck of the chemistry sets are magic...

In a series of increasingly hilarious and challenging disasters, they bring toffee bars, dust balls, Gwinny's doll's house people, Malcolm's pencils and one of The Ogre's pipes to life. The toffee bars eat wool, and the boys find themselves struggling to keep up with supplies - edges of the carpet, a succession of outgrown jumpers and their blankets start to disappear. The toffee bars also like heat, and keep escaping and melting over radiators. Malcolm shrinks himself, and later turns himself into an ever-changing rainbow. In a turning point experience, he and Caspar manage to swap into each other's bodies and have to manage a day at school experiencing each other's lives. A fierce competition develops between both sets of boys to top each other's exploits resulting, inevitably in clashes with The Ogre, who distributes punishments all around and the household steadily gets more and more chaotic and antagonistic until, with disaster piled on disaster the night of the special grown-up party thrown by the parents, there is a huge show down that results in Sally packing up and leaving.

It takes a week before they manage to track her down - not before they've had to wrangle Johnny, who in an agony of misery about his mother and life in general, cracks working out how to make himself invisible and decides to do away with The Ogre altogether. The others join forces to stop him, catastrophe is averted, numerous home truths are shared, apologies extended and general promises to try and do better in the future are made - just in time for Sally's return.

The chemistry set offers one last trick - but you'll have to go find a copy of this gorgeous romp if you want to know what it is! I read it in an afternoon when the weather suddenly closed in on Sydney and it cost me less than $10 on eBay - a good afternoon's work.
Posted by Kaz at 21:54