If you're listing classic children's literature - or any classic literature, come to that - at some point Tolkien's The Hobbit has to be considered for inclusion - in my humble opinion anyway! The papers and other media here are starting to pile up with previews, reviews, interviews, opinion pieces, retrospectives about The Lord of the Rings, and more, all because the first installment of Peter Jackson's adaptation of The Hobbit is due for release on Boxing Day in Australia. It's just as well I first read the book when I was eight, because it's precisely the kind of hype that usually puts me off things! I did, however, realise that it was simply ages since I'd actually re-read it, so I went and pulled my lovely ancient paperback off the shelf and demolished it in short order! 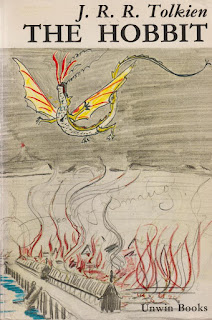 A quick look through Google Images turned up the fact this is not such a common edition and features Tolkien's own pencil drawing The Death of Smaug as the cover illustration. That tickled me a bit - I like it when my books turn out to be a little bit special. It was - for the benefit of one of my readers in particular who drools over my vintage books - published in 1966, and mine is a 1971 impression, inscribed by the family friend who gave it to me in 1972. Given it's been read almost annually since then, it's in surprisingly good nick! It also has Tolkien's maps of Middle Earth as end papers at the front and back, and the title page carries a facsimile of his signature.  DB started reading it as well, and was going to take it with him on his recent OS trip, but realising how old it was, decided not to...he was terrified something might happen to it!

I loved re-reading this book. Despite knowing it so well, I do find that different parts of the story surface with more prominence each time I read it - although, the adventure with the spiders in Mirkwood never fails to send an identical horrified shiver down my spine...I seriously don't do spiders... This time, it was Bilbo and Co's time with Beorn. When a friend and I were chatting on Facebook about different characters in the story, I think I mixed him up with Elrond. I realised my mistake later. Beorn, for some reason, hadn't really figured largely in my memories of the characters Bilbo and the dwarves meet along the way - perhaps because they only stay a short time, and also because he's not, in himself, an overly comforting figure. I have a distinct memory through numerous readings of this book as a child of being aware of a certain quality of darkness and discomfort at various points, alleviated by periods of respite in various havens - chiefly Rivendell and The Last Friendly House with Elrond. And then I was plunged back into darkness, fear, suspense and the like... I think I identified very strongly with Bilbo's frequent unspoken wish that he was safely back in his hobbit hole in front of a roaring fire!

Interestingly, Gandalf, who used to feel so comforting to have around, has ceased to offer me that sense of comfort. Maybe it's because I've now also read The Lord of the Rings trilogy so many times - and in those, we discover that he's not all-powerful as he appears to be in The Hobbit. It's also such a light-hearted book in comparison to LOTR - obviously, the stakes are not so high, but it takes reading it in context to appreciate the difference. The logical part of me was always frustrated by the fact that Peter Jackson made films of LOTR first, when, narratively speaking, they're sequels to The Hobbit. Obviously, the block-buster potential of LOTR - fully realised - made that the more sound financial proposition. I'll be interested to see what he's made of The Hobbit, although part of me is a little wary, given what I've heard. There is a wonderful simplicity about the story telling in The Hobbit and I really hope that that doesn't get lost in the availability of clever effects and the effort to make a similarly epic production - because The Hobbit, as a book, isn't an epic... The fact that Jackson has split up the story to make three films does bother me a bit - I found myself, as I read, trying to figure out logical places to stop. Of course, I lack Tolkien's notes for expanding the book, which Jackson has used to enlarge the narrative...

We shall see. Meantime - if you've been under a rock all your life and haven't read this gem of literature, DO go out and get a copy to read before you see the film so you can appreciate it in all of its quirky simplicity.
Posted by Kaz at 19:36