On the list of the ten most popular posts on this blog is my post about Elsie J. Oxenham's Abbey Girls series. One of the things that has fascinated me ever since I started this blog was what gets hits and what doesn't. If you'd asked me beforehand about the potential popularity of any of the posts, I'd not have picked that one to hit the top of the list -  a post about a long out of print series of vintage English boarding school books...! And yet, it is.

One of the issues with collecting old books is the availability of the books themselves. Until recently with the efforts of Girls Gone By Publishering and the Elsie J. Oxenham Society, the books were all out of print. It was a matter of scouring secondhand bookstores and op shops, hoping against hope that there'd be a treasure lurking tucked away on a bottom shelf, in the form of one of the more difficult to find from the series. I have a few of those in my - incomplete - set. Others I managed to pick up through dealers. And then the new paperbacks from the aforementioned publishers came out, with their covers carrying reproductions of the original hardcovers' illustrations. On the whole, they've been very well done, and it's marvelous to be able to actually read the stories, not just to be able to start filling in the gaps of the series. Currently, there are four new ones available that I need to save up to get that are so rare that finding the original hardcovers is well nigh impossible, and if one does surface, they can be prohibitively expensive.

Cut to the first weekly shopping to the South Melbourne Market and the [compulsory] exploration of the bookshop situated right at the bottom of the stairs from the carpark, and I was delighted to find a copy of Jandy Mac Comes Back - one of the later, and more common of the series. I already had it, my existing copy was terribly battered, and the one in the store was in good condition WITH an intact dust jacket - bonus. So, I fronted up to the cash register, only to be asked by the proprietor if I collected the series. When I said yes, he directed my attention to the two beautiful, fat, cobalt blue hardcovers on the top shelf behind the till...

He pulled them down for me to look at, and I was in lust, immediately. However, mindful of our tight budget at the moment, I regretfully handed them back - quite apart from anything else, I have copies of both. Nice copies, particularly the first one, but not first editions, and there is something a bit special about first editions...

Then DB appeared, asking what I'd found, and the guy pulled them down again to show him. Whereupon, DB insisted that I get them. I demurred, because $$$$$ - many $$$$$. Again he insisted, and I had to remind him of our very long list of other, more important things we need, for the house, for ourselves... But he was insistent, saying - correctly - that they were a once in a lifetime opportunity, and they'd give me huge amounts of pleasure - at which point the proprietor told us he was happy for the books to be paid off over time. That clinched it for DB - he fished out $100 and asked if that was enough to start with, which it was. Last weekend, I paid off the last $50 and brought them home.

They ARE beautiful, and I'm very tickled to have them. I'll take my copy of The Abbey Girls Again in and see if he'll take that off my hands, but I'll keep my original copy of The Abbey Girls as it is also a nice, very old edition, with quite different coloured plates - it's the book I used to illustrate the linked post about the series up at the top of this post.

DB has managed to save up to buy himself a new pair of nicks (cycling pants) in the meantime, which was one of the more urgent things on his list. We still need rugs for our floors, a cabinet for the glasswear that's still in packing boxes, and wardrobes for our bedroom so we can stop living out of suitcases and packing boxes, and an island bench for the kitchen that has additional storage space... We'll get them all eventually, and in the meantime, I have my beautiful treasures which are motivation enough to pull all the books that just got unpacked and shoved into the bookcases any old how, and rearrange them properly so that they can take pride of place at the beginning end of the line of Abbey books! 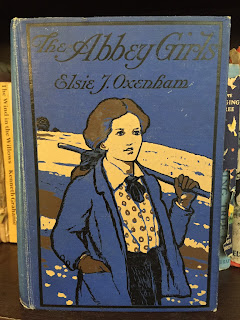 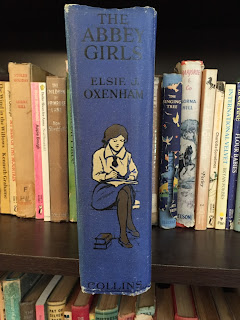 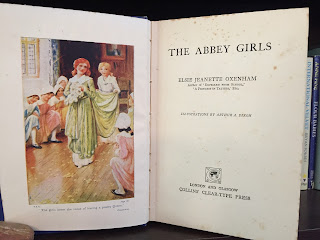 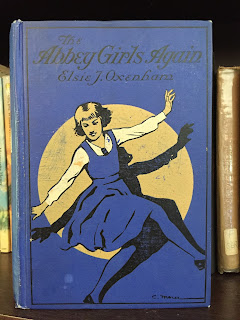 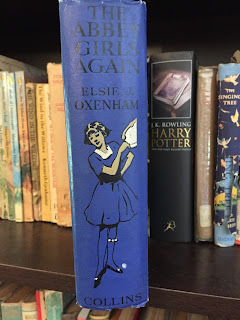 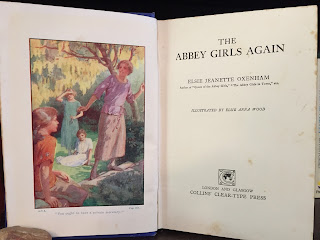