New series...prompted by this pic from Facebook this morning: 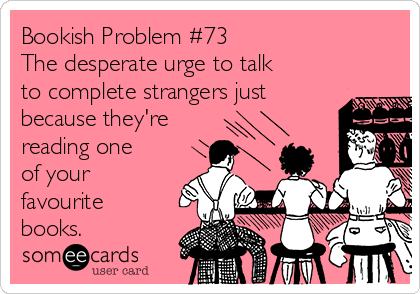 So, 'fess up people... Who's actually given into this urge?? I have, a few times, and have ended up with a predictable range of responses... There are the curmudgeonly types, who don't want to speak to anyone, hence hiding behind their books. I understand. I have my days like that too! I hesitate to disturb people who are dug in with coffee at a cafe with their book, but I have initiated conversations with people on buses and trains when I was commuting. Someone broke into my reading on a plane a little while ago when I was reading The Little Coffee Shop of Kabul to ask me if it was as good as the hype said it was at the time...and I was pleased to be able to say that yes it was. I'd bought it in the airport bookshop before the flight, and was about a third of the way through it when she asked. And, no, there isn't a post about it, because it was read during one of those messy periods when I was travelling a lot and not blogging much...but it may see the light of day at some point next time I re-read it.

Confessions please - I'll take your stories in the comments...!