There's a monster thunderstorm brewing here. I've been watching the sky darken and the clouds get lower, and there's a growing brassy quality to the light that suggests it's really going to be something when it unleashes itself. I'm not bothered by thunderstorms. I love the drama of them. But there is an undeniable tension that mounts as it builds to breaking point that is getting to me a bit. So, to some internet surfing, looking for ideas for my perfect home library set up... 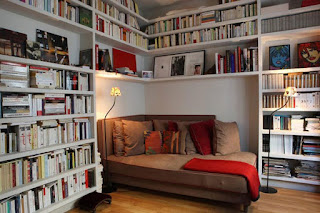 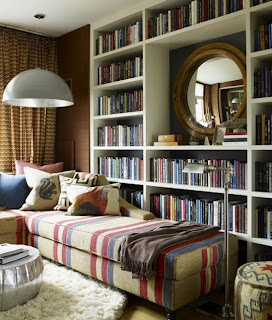 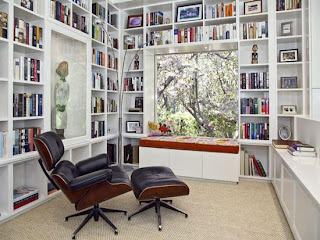 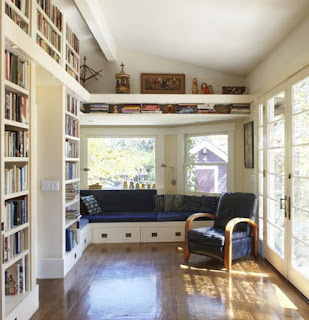 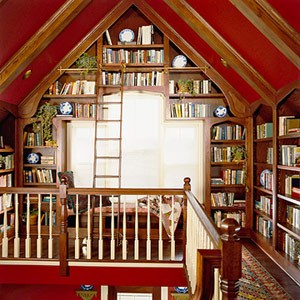 Google 'home library' sometime - you'd be amazed at the variety of images that you can find. I didn't do too much editing as I browsed. I set myself a limit of five images and then went with the ones that really grabbed me. They're fairly eclectic - which is reasonably predictable, but, on looking at them all together, I'm realising that without having really thought about it, there are some particular things that I would like to have in my ideal home library.

This last one got me for its whimsicality. I had a mezzanine level in a house Twenty-Seven and I lived in in the Adelaide CBD just before moving back to Sydney. Because of the layout of the place, I had to split the books up and half of them were upstairs, wrapping around a corner of the mezzanine which also sported a divan bed and my desk - making it not unlike this space. I like the idea of an upstairs library - that sense of being up in an eyrie... In the Adelaide house, that was heightened to an extent because there was a huge tree that filled the small rear courtyard, so the view out of the casement window over my desk was straight into the middle of the tree, which was very cool!

So, to take elements from these five images and combine for my perfect library... I want the upstairs thing from No. 5, with its high ceilings and odd shapes. I also want the warmth of the natural timber and the rugs on the floor. I want the utter indulgence of that enormous window seat in No. 4 - it's HUGE! Might be very hard to find the motivation to get out of that spot... I like the mad, spidery lamps in No. 1, and the pile of cushions on that big daybed - borrow those to pile up in the window seat. I get the mirror in No. 2. Part of me likes the idea of making space for other elements in the shelves - there was another image I liked that had a painting hung over some of the shelves with books behind - but, ultimately, I struggle with taking shelf space that could be used for books! All but No. 1 have wonderful natural light too - must have natural light and windows that open. Last but not least - absolute MUST, regardless of any other features - I have lusted after an Eames chair and ottoman since absolutely forever. I don't want a reproduction one. I want an original - preferably a rosewood one with black leather. We actually found one fairly recently, for the best price I've ever seen. Still too much for now...but, one day, who knows...?
Posted by Kaz at 22:13