Bookworms will rule the world...

A friend of mine posted a mad picture on Facebook the other day that just cracked me up, and as I said in a comment at the time, "I must have this for my blog", because it is, possibly, one of the undeniable facts/characteristics about the dedicated book junkie. (That last bit...dedicated book junkie...bit of a tautology, perhaps?) Anyway, for those of you who qualify, here it is, and for those of you who are following this blog who haven't yet reached full book junkie status, mind with the potential smart comments...! 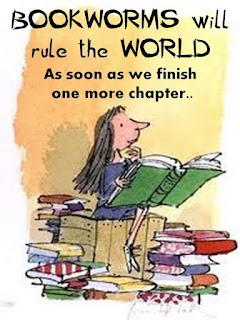 And why this topic this morning? Well, the weekly assignment is hanging over my head - I freelance for a ghost writing company, and we have a large regular order of blog posts to fill each week, with each of us having anywhere between ten and forty to write... Sometimes I get on a roll and they just write themselves. This is not one of those weeks, and I'm doing them in small bites. Avoidance appears to be the more powerful motivation than getting the words down - and writing my own blog posts, which don't have clunky, unwieldy key word phrases, are about something I enjoy, and via which I gain interesting conversations with my increasing group of visitors that are most satisfying feels like a much more attractive option! Sadly, the other ones are the ones that pay, so there is an imperative to get them done - quite apart from the enormous sense of freedom I experience once they're uploaded onto the work portal, knowing I can go do something more fun - like read - without feeling that nagging sense of unfinished work.

I finished Salmon Fishing in the Yemen. For those of you who have only seen the film, go find the book - seriously. It is a lovely read, and a very, very different experience to the film - which is, as the note in the credits said, 'based on the novel by Paul Torday' - my emphasis. When film makers use an existing book as a premise for a film, they have a number of options, some of which may or may not be dictated by the involvement of the author. I referred to the Harry Potter franchise in my previous post, and that is a case in point, as JK Rowling was a constant presence in the transition from book to big screen, and it shows in the finished films. Salmon Fishing in the Yemen takes the main concept - that of the salmon fishing mad Yemeni sheik building a river in Yemen specifically for fly fishing - and some of the central characters, and then weaves a story loosely based on the original text. And it works - it's a lovely film.

The book takes the narrative to a totally different conclusion, with all the complexities of international, party, personal and environmental politics driving the story to its, possibly, inevitable ending - which is an ending with some degree of things unfinished. Not useful for a film maker, but workable in a novel, where we get to carry on the possibilities in our own heads, if we are so minded. I'm not going to go into the details, because I'd really like to encourage you all to go find the book, but there are all sorts of personal untidinesses in Torday's book that get only lightly touched on in the film - they'd get in the way of the conclusion of the film, which is much more 'happily ever after' than the original. Many things get resolved in the film that, in the book, can't be - and, therefore, have to be lived with by the characters. Ultimately, I think I found the novel the more satisfying of the two - although, the visuals in the film are glorious. I'm not sure where they shot the film - whether they actually were in the Yemen - but the stark beauty of those locations was absolutely breathtaking. I remember similarly brutally rugged deserts when I traveled south in Israel in January 2008. Having grown up in a desert region of my country, there is something very powerful about the majesty of these bare landscapes with which I identify. For that alone - almost - I'd see the film again!

I then read Living Memory by Andor Schwartz, the story of a Hungarian Jew's survival during the Holocaust. It was, as the rabbi who write the foreword said, absolutely gripping - despite (and this is not what the rabbi said, it's my experience) the somewhat rambling, stream of consciousness style of the narrative. Schwartz wanders back and forth in memory as he tells his story, very much as if each chapter is the writing down of an actual conversation. Having heard so many Survivor stories, and worked with Survivors, it was very much as if I were in the room with him. However, I can imagine that there might be some readers for whom it could be frustrating and irritating - in much the same way as it is possible to get frustrated and irritated having conversations with elderly people whose memory wanders off track.

Having said that, I have two very important memories from my time as a Holocaust educator at the Sydney Jewish Museum. One is something one of the Survivors used to say to the kids at the end of his testimony, "Go home and tell your families that today you met a man called Eddie, and this is his story". He was the sole survivor in his family, and part of the reason he tells his story is so that those who hear it will continue to pass it on so that his beloved family members are not forgotten. The second was while I was studying in Jerusalem at Yad Vashem, the Holocaust Museum. One of our presenters stood in from of us and told us, most emphatically, "Don't try and teach six million". No one can absorb six million - it's just too many people. She taught us to seek out stories of individuals and teach those. As individuals, we can hear another person's story. We can find elements with which to identify, and so we remember. We have just gone past Yom Hashoah, Holocaust Remembrance Day. It has been with me, and I always try to find and read a new story of survival around this time for this very reason.

And so, on that somewhat introspective note, I will end this post and battle my way back into my work so that I have a good chunk of it finished by the end of the day. It is due for upload on Tuesday. In order to not fall into the trap of the picture (!), I started re-reading Mary Norton's The Borrowers, a much loved children's classic, which I know so well it is perfectly possible to put it down mid-chapter and get on with what I should be doing!