It's been a bit of a week, with little time to read or write - apart from the dreaded must-do-assignment writing, and I think that the whole burnout thing is hitting pretty hard. We did make it down to the storage unit to retrieve my portfolios which had mistakenly ended up there, so another stage with my room has been achieved: 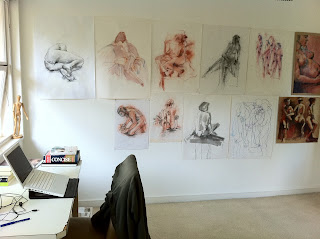 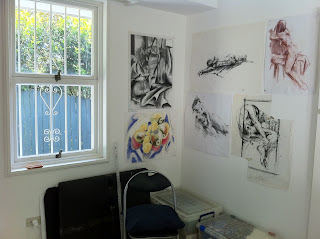 I haven't had a room where I can just stick things on the wall with tape since I was a teenager! It felt just a little bit bad while I was doing it, but lots of fun. Now need to get the big table and the easel in here and I'll be sorted.

I finished The Postmistress and this time, read the author's note at the end. Right at the end is this:

It resonated, for so many reasons. And it has stayed with me. Within the context of the novel, it's about the news - how it travels, how it is delivered, what is told and how it is told - and the choices all the way along that chain. But, it struck me that it's about the choices we make in how we deal with each other on a daily basis - not just the big things, not just bad news, or good news for that matter. It's about the editing we choose to do or not do every time we communicate with each other - even those, maybe particularly those, closest to us.

I have a new book, a gift - which are the best books of all! Dearly Beloved doesn't do Valentine's Day...apparently. Particularly in the light of our current tight finances - he made a great point of instructing me NOT to spend anything on getting something for him. It comes two days after his birthday - and he'd made a big speech about money not being spent on presents for that too - so it's always a bit of a challenge in any case, but as I said to him, he'd shot himself well and truly in the foot. He told Sixteen and I we weren't to spend any money at Christmas time - so we were both quite circumspect....and then got showered with gifts from him. So, this time, I told him I wasn't listening to him. I - with great skullduggery - covered the bed with Lindt chocolates bought the day before (it's terrible working just down the road from their shop...) and then headed off to work. And waited...all day for a message from him, which never came... He managed to go into the bedroom at some point during the day and change clothes before heading out, and didn't see them... Amazing. So, still no word by the time I got home, and then, while I'm making dinner, he presents me with a tiny parcel...and a card with an elephant and hearts - so I sent him to the bedroom forthwith!

The book is just gorgeous - one of those literary treasures... Letters to a Young Poet - ten letters from Rainer Maria Rilke to Franz Xaver Kappus, a young student at the school where Rilke had gone. They cover a two year period when Kappus, initially writing to send his poems to Rilke for critiquing, becomes part of a much broader correspondence about art and life. They are just beautiful. It's so hard to get hold of Rilke - I have a tiny volume of poems in amongst my mother's poetry collection that I dip in and out of, and they're always as thought provoking as they are lovely. I first came across him via Drusilla Modjeska (remember, I said she was central to much of my writing...?) quoting him in Poppy.

Otherwise, it's back to Catcher - which should have been a relatively quick read and hasn't been, due to being too over committed to fit much reading into the schedule, WHICH MUST CHANGE!!
Posted by Kaz at 19:17