A Room of One's Own

The crux of this - 'one of the greatest feminist polemics of the (20th) century', from the blurb on the back cover... - small book is that, in Woolf's opinion, that what a woman needed to realise her full creative potential was £500 per annum and a room of her own.

I am writing, this morning, at a small table facing a bank of windows that overlooks an overgrown, but pretty leafy courtyard at the back of the house in a space that, yesterday, Dearly Beloved dubbed 'The Writer's Room', in much the same way that Twentysix named my customary armchair years ago when my first article was published and paid actual money, 'The Writer's Chair'. I suspect, given the size of this house and the somewhat separated and isolated location of this room - out through the back door, across a wee porch that's open to the outside, then up a step into this room - that it may have been intended originally as a maid's or housekeeper's room. When it became very clear that it would remain unused unless I claimed it, and unless I claimed it I would be relegated, once again, to working wherever I parked myself with the laptop - which meant on the bed if I needed to escape from the television or other people's music - I asked for one of my tables to be moved up, which happened yesterday afternoon. 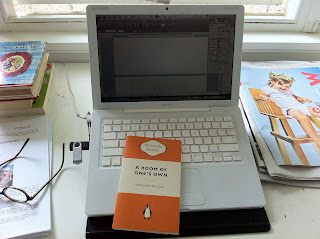 This is just a beginning. The table is the smaller of my two tables - and will, eventually, be on the other side of the room with an easel because it has a laminex top that can be trashed with art equipment. Downstairs in the garage is the other table - one of my great treasures - an old pine baker's table. It will almost span the entire space under this bank of three windows, but is under a metre wide, so it won't intrude on the room. It will give me room to leave my sewing machine up and ready to use at one end, and allow me to spread to tools of my trade around the laptop for when I am working...

I went and dug my copy of Virginia Woolf's essay out of the bookcase - the joy of knowing exactly where to look is not to be ignored... -  thinking it would be a timely re-read. It is one of those books which, as an academic, an artist, a writer, a reader, and...a woman..., I had always been aware of, but hadn't read. One of those books from the 'definitive' list I may make one day - my definitive list of the books one should read! When I started my post grad studies, I also began a Women's Studies unit from an undergrad degree course at another university - bit messy, but I had an idea for a post graduate thesis, and I needed the unit to gain entry to that particular school if I were to follow up on the idea.


After years of visual art based academic reading and writing, I was suddenly confronted by literature in a formal style that was completely new. The last time I'd studied literature critically was in high school, so it was a monstrous jump. As it was the introductory unit for literature in Women's Studies, A Room of One's Own was on the reading list. Not only was I now going to get to read it, I was going to have to read it critically and write about it... Which I did, but goodness knows where those papers are - somehow, I have all the post grad art history papers stashed away but not the Women's Studies ones...odd. They will be on the hard drive of my old computer which is now in storage - being saved for an opportune moment with a geek who can retrieve what's on it!


I've just read the opening pages again, and will need to now be totally disciplined and put it to one side so I can get some work done as I have a large extra assignment that needs its back broken today. But, it's a nice neat little book that will fit into my bag for commuting next week, and I'm looking forward to tickling my brain with some Woolf after all the Heyers and my current re-reading of What Katy Did, which is in an omnibus that is just too bulky to carry back and forth to work.

So, now I have a room of my own and absolutely NO excuses for lack of creative output! A realisation of a need, and also, the imposition of a much needed sense of discipline so I can get through the work that needs to be done! I can hear the birds, there is a nice breeze, I can hear, distantly, the sounds of the household, but they're not intrusive - just nicely companionable.


And, by the way, fellow book junkies - don't forget there are books for sale, looking for congenial homes... Check out previous posts Books for Sale, and The Library Installed for the lists and buying instructions - I look forward to getting your emails!!
Posted by Kaz at 15:37